Sometimes it takes the simplest things in life to make you happy. Our departure from Refugio came courtesy of an aggravatingly rolly night at anchor, waking up from storm nightmares at 1am to be greeted on the radio by a foreboding 3 day long small craft advisory/ gale warning from NOAA, followed by a confusingly calm morning when we made our way to Santa Barbara harbor, where we knew we would be safe and comfortable for the duration of our stay. At $38 a day, spending 2 nights docked for something we usually get free on our tiny budget was a bit of a splurge, but we vowed to be back out at anchor as soon as possible, after some good nights of sleep. 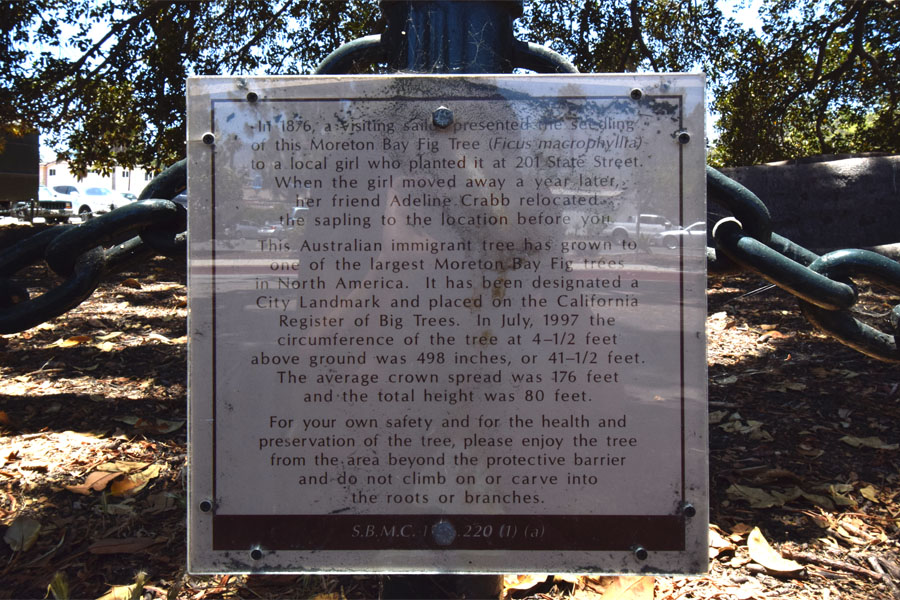 The most outstanding feature of Santa Barbara is its Spanish Colonial Revival architecture, adopted as the official civic architectural style in honor of the town’s Hispanic heritage. Red tiled roofs, rounded features and painted tile work are complimented in the warm sun by a generous assortment of lush plants and courtyards where parched birds drink from burbling fountains. State street is the main tourist district here, where heritage style buildings are filled with restaurants, bars and clothing stores. We had some ice cream at McConnells, reputed to be the best ice creamery in California, and some wood fired pizza at Persona, which won an award in Italy. Not having tasted every ice cream and pizza in California or Italy, we can’t say for sure if they are the best, but we did enjoy our food. Those that like their drinks hard will also be happy to know that Santa Barbara is well known for its craft beers and wines, especially pinot noir, a wine that is difficult to make well.

One of the prettiest buildings in this town might have a boring name; the Santa Barbara County Courthouse, but seeing it for yourself, you’d understand why on this nondescript weekday, we found 5 couples simultaneously having their wedding photos taken all around the building. It boasts an 85 foot clock tower which offers a panoramic view of Santa Barbara, with the Santa Ynez mountains to the north and the Santa Barbara channel to the south.

2 1/2 miles north of our anchorage lies the Old Misssion of Santa Barbara, built in 1786 and home to a community of Franciscan friars. Now the namesake of the city of Santa Barbara, it was named after the legend of Saint Barbara, a girl who was beheaded by her father for following the Christian Faith.

Back on Monsoon, we have officially stopped using the heater at night; we are far enough south that it is no longer cold enough to need one. Walking along the streets of Santa Barbara one day, a local sees us taking a photograph of the buildings, and says “Welcome to the most beautiful town in the world”. Why, we ask. “Just look at this weather. We have 1 week of summer and 1 week of winter a year, and then it is spring the rest of the time. Enjoy your stay.”